So often, I feel like we get this idea that a vegan is a hippy-dippy, healthy, millennial woman. While lots of us are (lol), many aren’t! There’s no one unique way to be a vegan, and I’m on a mission to show you how different vegans can be.

I am so excited to bring you this new regular series where I’ll be interviewing different vegans and sharing their answers. From this, I hope you draw some inspiration or find something relatable. all the answers are totally from the individual’s perspective, and the pictures are of her own food!

Today, we’re talking to Hannah. She’s a vegan bodybuilder and fitness guru. You can connect with her at VeganaHannah.com and on her social medias, Instagram and Facebook. Let’s get into it!

How long have you been vegan?

Why did you go vegan?

I became a vegetarian when I was 11 years old after watching an episode of Braceface where the lead character became a vegetarian after seeing what goes on outside of a slaughterhouse. As I did more research into the subject, I realized how passionate I was about vegetarianism. Growing up I realized that veganism was more in line with my values and I knew I’d eventually become a vegan. It wasn’t until after watching Forks Over Knives 3 years ago I finally made the switch to veganism.

Why did you stay vegan?

I stayed vegan because of the way I felt through eating a plant-based diet, as well as the pride I had for living a lifestyle that was in line with my morals and ethics.

What does a normal day of eating look like for you?

Currently, as I’m prepping for my next bodybuilding competition, my diet’s a bit stricter than my off-season. Typically I start the day with oats, berries, and protein powder. My lunch typically consists of a tofu or tempeh centered dish with veggies and sauce, and dinner is a bean centered dish with a grain and veggies. I snack on edamame, sweet potatoes, rice cakes, and usually end the day with banana protein “nice” cream. On my prep diet I don’t consume any oil, processed foods, or gluten, unless it’s one of my treat meals.

Yes- high carb, moderate protein, and low fat. I’m oil-free during prep and mostly gluten free. In off season I’m a little more flexible however I’m trying to transition to completely oil free with the foods I make at home. Gluten is a hard one though as I’m obsessed with bread and pizza.

What challenges do you face with food?

Right now the main challenge for me is developing and creating recipes that are gluten free, vegan, and oil-free. That’s definitely tricky. Many blogs and books will have two of those things, but not all of them. However I love a challenge and I’m quite determined, so I will find a way to make a healthier version of my favorite foods.

What challenges do you face socially because of veganism?

It can be difficult at times going to parties or events as a vegan mostly if people are rude about it, or want to “Out” you as the vegan of the group. It can also be a little awkward when you’re with a group and they want to go eat somewhere that has no options for you. But luckily here in Austin most places have at least one vegan option, and the people here are typically pretty open minded. One thing that gets a little old is people always saying how much they love meat as soon as they find out you’re vegan. Or when you’re just trying to enjoy yourself at a party and people just want to debate with you. I’ve developed a policy that I don’t discuss it at the table when I’m trying to enjoy my food.

Ooh that’s so hard to pick- however I love making vegan cinnamon rolls, pancakes, cake in a mug, and “nice” cream with magic shell.

Is there anything you’ve found that makes being vegan easier? Like a support group, app, etc.

I think having vegan friends to talk to and vent your struggles and frustrations is important. Or even just vegan friends to talk about amazing vegan food with- as they can relate. I think the only thing that really makes it easier is experience and time. You’re going to make mistakes at first and you just have to learn by making them.

Is there anything you’ve been surprised to find out is actually vegan?

Sour patch kids, Oreos. I recently found out Hershey’s Syrup is vegan. That surprised me.

How does veganism impact other aspects of your life apart from food? Like beauty products, clothing, etc.

It’s definitely made me change the way I shop now. I don’t buy makeup unless it’s cruelty-free. Same with my other toiletry items. However I like to make my own lotions and toothpaste from scratch with essential oils. That way I know what all is in it and it’s all natural.

Is there anything you want non-vegans to know?

I want non-vegans to know that our food is actually pretty awesome. Not only that, but veganism isn’t about being perfect. We don’t think we’re better than everyone else, but we do think it’s pretty great that we’re helping animals, the environment, and our health through this lifestyle. I think that pride often gets misrepresented.

There are some very passionate vegans out there that get labeled as “angry” vegans. However, I think it’s important for omnivores to realize that there’s a reason why we’re angry. Animals are being tortured and brutally killed by the millions every day, when we’re actually healthier and living longer when we leave them off our plate. It’s pretty infuriating when you think about it. If more people would make themselves aware of what is really going on, they would be angry and upset too.

What advice would you give to an aspiring vegan?

My advice would be to start slow. Take things step by step. Perhaps start by cutting out meat, then dairy and eggs, then gelatin, honey, leather, wool, etc. You don’t have to make a complete switch overnight. I think it takes time to change your habits and to break your old food addictions. Veganism is not about being perfect- it’s about living a life of compassion. This includes showing compassion towards our fellow humans. You can’t have one without the other. The only way we’re going to create change is through leading by example. People are a lot more receptive to your message when you’re down to earth and compassionate. Like they say- “Be the vegan you would have liked to meet before you were vegan.”

Another note from Hannah:

Right now I’m fundraising for my next competition, which is a Charity Competition. It’s the M.A.V.S. Charity Classic in Dallas on March 24th. Make a Vet Sweat is a 501 (c)(3) that helps veterans and their spouses cope with the symptoms of PTSD by providing 3 months of a free group exercise program of their choice. Their overall goal is to lower the number of veteran suicides that occur every day throughout the United States. For anyone that shares my fundraiser, I’m sending them my healthy dessert recipes, and anyone who donates money gets my healthy recipe book with everything included. In addition, if I win this competition I’ll be sent to compete in the Arnold Classic in Brazil in April. If I raise enough funds, my show expenses will be mostly covered, which will help me to continue to spread the vegan message. The link to donate is-  https://donate.makeavetsweat.org/hannah

Thank you, Hannah, for interviewing with me. I’m so impressed by people who can maintain veganism… but add on being a bodybuilder?! That’s so amazing.

Were you surprised by any of Hannah’s answers? Do you have any questions? Let’s talk about it in the comments!

One thought on “What’s a Vegan? Interview #2: Bodybuilder Hannah” 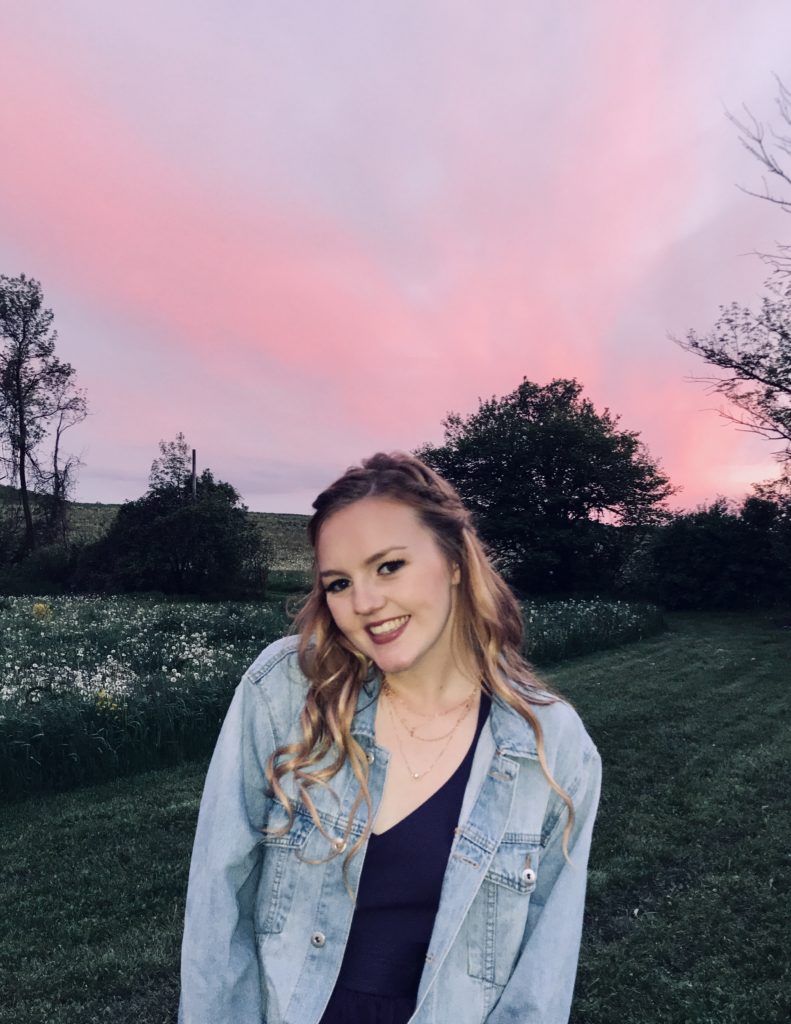 A unique name for a unique person. I’m passionate about the earth, organization, and laughter. Let’s be friends.